May 16, 2018
Hello all,
I just wanted to announce the launch of my debut novel PAWN OF THE GODS. It's published for free on Amazon Kindle until May 22.  After that, it will go on sale for $3.99. PAWN OF THE GODS 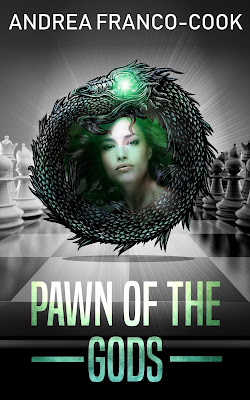 According to Mayan prophecy the gods of the underworld will declare war on man. Their undoing however, lies hidden deep in the Yucatan in 1572, when a winged entrusted a celestial weapon to a Spanish Conquistador for safe keeping.

Five hundred years later, the winged god reveals himself to Soledad Mendoza, detailing how she is tied to the conquistador, and the impending war. But the young English professor is unsure of herself. Out of shape and a lonely widow at thirty, her predilection for scotch makes her more suited to join a twelve-step program, than become a hero.

Unfortunately, Soledad is forced into action when she learns her family friend, Senator Earl Edmondson has ties to the conquistador and the weapon, ties that could either harm or help her.

A pawn caught in a dangerous game that includes a deity with a secret agenda, and a woman with an extraordinary destiny; Soledad must figure out who to trust or the fate of humanity may suffer.
PAWN OF THE GODS flashes between the sixteenth and twenty-first centuries, blending Spanish history with Mayan lore and apocalyptic biblical beliefs.

This book was a serious learning experience. It began as a 2012 piece and after that year came and went, I reworked the piece. Then a couple of big name publishers had the manuscript and wound up passing on it.

Defeated and disillusioned I filed the book away. Five years later, a friend talked me into self-publishing it. I blew the cyber dust off the MS, had it copy edited and hired a cover artist. It's now published and for a short time, you can download it for FREE.

There are a lot of religious themes in this piece. However, it's tough to write about gods and not incorporate spirituality into the story. It's also very, very adult with graphic details that one can expect from an Urban Fantasy. At the end of the day, the overarching message is a positive one. I hope that each of you enjoys reading PAWN OF THE GODS as much as I enjoyed writing it.

Popular posts from this blog

ISWG Are Online Whisper Groups Bullying YA Authors Out of Publication? What's an Author to Do?

February 06, 2019
t's time for another installment of the Insecure Writer's Group hosted by the illustrious Alex J. Cavanaugh. To learn more about this supportive group click on the host's name.

I feel very strongly about what happened to this author, and I fear it could happen to the rest of us if we don't stick together.

Recenty, SCMP reported that after signing a seven figure book deal for the Fantasy, BLOOD HEIR, Chinese author Amelie Wen Zhao was forced to pull it from publication due to allegations of racism.

The premise of the highly anticipated Fantasy trilogy was a retelling of Anastasia, except Zhao's adaptation used blood magic. Critics felt the story had racist undertones because of the cover blurb's description of a "World where oppression is blind to skin color and good and evil exist in shades of gray."

Many criticisms came from a whispers online group, which, from my understanding are sort of the gate-keepers to approving YA novels.  I'm sure this is…
Post a Comment
Read more

ISWG Writing Myself Into a Corner

January 02, 2019
It's time for another installment of the Insecure Writer's Group hosted by the illustrious Alex J. Cavanaugh. To learn more about this supportive group click on the host's name.

First and foremost, happy New Year!!!!
Now, onto the subject at hand, LOL. Currently, I'm writing a Young Adult Fantasy that transports the MC to ancient Carthage in 216 BCE.  The pacing is pretty fast throughout with a few rest spots for the readers. While I like what I've written so far, it wasn't until chapter 28 that I realized my MC hadn't spent enough time in Carthage. She walked through the city as a prisoner, was captured by the God Ba'al Hammon's guards, spent some time in the temple and was then set on her journey. While this is well and good, my heroine has to make a choice that will affect the fate of the Carthaginian people. To accomplish this, she needs to be invested in them, to care about them. Needless to say, I was pissed off that I left such an important …
Post a Comment
Read more

December 07, 2011
Hello everyone, it's time to write another post for The Insecure Writer's Support Group, hosted by the gracious Alex J. Cavanaugh,   I hoped to publish this earlier today, but as usual, my hectic schedule interfered.  Best laid plans...

Although Andy Williams describes Christmas as "The most wonderful time of the year," there are occasions when  I forget the reason this is true.   Long  lines filled with frustrated customers suck the joy out of shopping.  In addition, I feel overwhelmed by the whole gift giving process. It's difficult to find gifts that everyone will like.  All the hoopla during the holiday is draining.

Today, while standing in the mall and stressing over who to buy what for, my attention was drawn to the sound of carolers at the lower level.  Without haste, I made my way to the music, and as I stood there, listening to the joyful sounds, my spirits were immediately lifted.  In those moments,  it occurred to me that I had focused so much on the…
3 comments
Read more